Will Ramsey Creek Beach be better this year? Officials hope so

Everyone has high hopes for a smoother sail this summer at Ramsey Creek Beach on Lake Norman.

“We learned some lessons last year and are aiming for an improved start on the front end this year,” Greg Clemmer, Mecklenburg County Park and Recreation superintendent, said.

As the only public Lake Norman beach in Mecklenburg County, the Cornelius beach’s inaugural 2016 season was filled with curious beachgoers, but complicated by overcrowding, the lack of adequate pedestrian/walkway access, and delays in getting a new traffic signal installed.

Last summer, the beach attracted over 68,000 bathers, which Clemmer admits was more than they expected.

[info]MY BIGGEST CONCERN IS THE TRAFFIC CONGESTION ON NANTZ ROAD, NEAR CATAWBA. THE REAL TEST WILL COME WHEN THE BEACH OPENS
-Kim Goodrum[/info]

The crowds were especially large during the first month, resulting in traffic congestion on Nantz Road approaching the park and bathers walking on the street due to unfinished pedestrian walkways.

Coupled with the delay in getting a traffic signal installed, conditions for the beach neighbors were dicey to say the least.

“We had a constant line of cars turning in our driveway because the signage for the park was inadequate,” said Roger Morris who lives on Nantz Road across from the park entrance. “Coupled with people walking down the middle of the street, it was worse than bad. …

“With the new signs and signal, we’re hoping things will be better this year.”

“We’re opening on May 20, earlier than last year, to work out any kinks prior to Memorial Day weekend,” Clemmer said. “The shuttle buses will also be running from the park and ride lot in Huntersville right from the first weekend, new signs have been installed, and we now have that traffic signal at the Nantz Road/Catawba Ave intersection, which should help immensely.”

The county has also partnered with the Cornelius Police to have security cameras installed at the beach and adjacent parking area, which are monitored 24/7 by the police. The beach parking lot had about 130 parking spaces last year, but the county re-striped the lot and grabbed some spots from the boat lot so now there are 247 parking spaces, including 29 handicapped.

However, some neighbors on Nantz Road, a residential street that ends at the lake, still have their doubts.

“My biggest concern is the traffic congestion on Nantz Road, near Catawba,” said Kim Goodrum. “The real test will come when the beach opens. However, I do think the new traffic light is an improvement.”

Goodrum also said she thought the beach would have been better situated at the county’s Jetton Park, where she says park access had greater visibility.

The cost of installing a traffic signal at the Nantz Road/Catawba Avenue intersection, the only road access to Ramsey Creek Park, was covered by Epcon Communities, which is building a group of single-family, age-restricted homes nearby. However, the signal installation became one of the biggest headaches during the beach’s first year of operation, according to Cornelius Town Commissioner Dr. Mike Miltich, who lives near the beach. “The county had originally said the light would be in by last Memorial Day, but the road had to be realigned first, which required substantial utility relocation.”

As a result, installation was put on hold and the town had to station a police officer at the intersection throughout the summer season, for which they were reimbursed by the county.

The signal finally went into full operation in April.

One issue which will not change is the unique appeal of the beach itself. Lake Norman has more miles of shoreline than the North Carolina ocean coastline, yet Ramsey Creek Beach is one of only two public beaches on the lake, the other being Lake Norman State Park 22 miles away in Troutman. 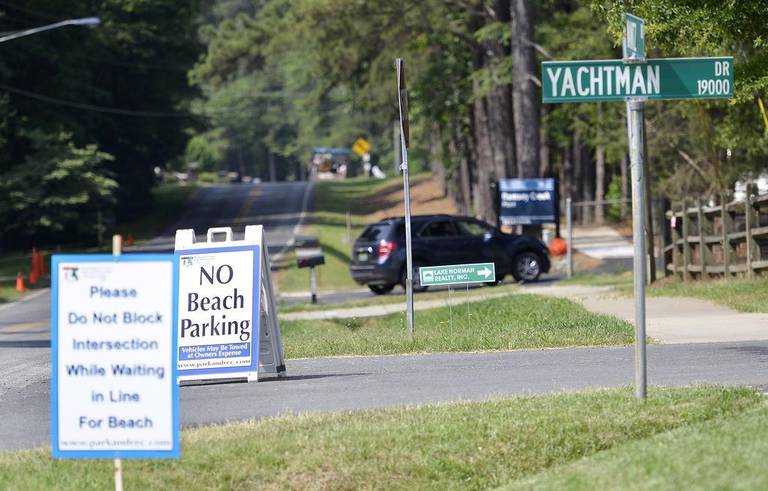 Guardians of Ramsey Creek Beach in Cornelius aim for smoother start this season, the second year the public has access to this swimming and play spot on Lake Norman. John D. Simmons jsimmons@charlotteobserver.com

At Dupont Real Estate, we know our community and we know our market. It is imperative to stay in the know with our growing community! We are your Real Estate Resource. If you are looking to buy or sell a home in Lake Norman, Charlotte, or surrounding areas anywhere in NC, SC, or VA. We are here to assist you! Contact Us.

Need a New Roof? Check Out This Sustainable Option

Look up! Does that roof of yours need replacing? Eco-friendly options are out there, including the now popular metal roof. What makes metal green? According to ...
Read More...

Moving? Here’s How to Settle in Sooner