Pay Your HOA or Condo Due Or

Pay your HOA or risk losing their home

Pay Your HOA- Residents are falling behind on association fees, and one family faces foreclosure.

April and Richard Maher are homeowners in Indian Trail whose home is slated to be auctioned off because they owe homeowners dues. T.ORTEGA GAINES-ogaines@charlotteobserver.com

An unprecedented number of Charlotte-area residents are failing to pay dues to their homeowners and condominium associations, driving worries that pools will close, maintenance will suffer and property values will fall.

Lawyers and management companies for hundreds of community associations in the region say dues delinquencies have risen sharply with the foreclosure crisis and the sour economy. Although they don’t know exactly how many home and condo owners are in arrears, they say it has likely doubled in the last two years.

Mike Hunter, a Charlotte lawyer for about 500 associations, estimates that about one-fifth have serious delinquency problems. His firm files more than 100 liens a month against owners whose dues are more than three months late, he says.

Foreclosing on owners with unpaid dues is rare – but more likely as associations get squeezed. An Indian Trail family’s home is scheduled for public auction Oct. 8 because the couple owes $2,200 in dues.

More than 30 percent of the owners in some starter-home communities aren’t paying their dues, an unprecedented number, says Gail Pizetoski, whose Davidson-based Jorel Association Management works with 45 associations.

“One neighborhood fired the landscaper and has volunteers mowing the lawns,” she says.

Hunter says he’s seeing the highest delinquency rates in starter-home neighborhoods and older condo complexes that have a lot of absentee owners. “But there are beginning to be more homes in affluent neighborhoods.”

It’s a combination of factors, he and others say. Homeowners with adjustable rate mortgages get stretched when the rate goes up. Gas and food prices are higher, and people are losing jobs and income in a rough economy. It’s easier not to pay the homeowner dues than to skimp on food or daycare.

Owners associations collect dues and provide services for hundreds of thousands of people in the Charlotte region. State law allows legal action – even up to foreclosure – when owners don’t pay dues. Hunter says he sees dues ranging from $175 a year to maintain small subdivision common areas to $350 a month for extensive services in a high-rise condo.

Associations represented by Hunter and two management companies declined to be interviewed by the Observer, saying those officials could speak for them.

Frank Rathbun, a spokesman for the Community Associations Institute, a national trade organization for about 300,000 associations covering nearly 60 million Americans, says dues delinquencies have climbed across the country for two years. It’s especially bad in places like Florida, California and Nevada where foreclosure problems have mounted.

“Delinquency rates are 10 or 20 percent or even higher in some places,” he says. “If you have that many not paying their dues, it puts the association in a difficult situation.”

Dennis Abbott, whose Charlotte-based Abbott Enterprises provides management services for 80 associations, says a 3 percent delinquency rate used to be typical for those communities. But in the last year, it’s averaged 41/2 percent, with more associations crossing the 5 percent threshold – and one at 10 percent.

At 5 percent, he says, communities need to take more serious steps to keep services up to par.

April and Richard Maher moved to Indian Trail two years ago from Florida and bought a house in the Taylor Glenn subdivision for $289,900. Because they had an adjustable rate mortgage, their payments have gone from $2,400 to $3,600 a month. They have three children, including a 3-month-old daughter. They’re employed at lower-level jobs than they had in Miami, she said.

April Maher said they received notice last year that they owed $2,200 in homeowners association and legal fees and didn’t pay it “because food for the kids was at the top of my list.” Their annual fee is $795 a year. She said their interest rate has jumped from about 9 percent to 13.6 percent and is due to go up again. At the moment, she said, they are current with their mortgage payments.

She said they didn’t know the homeowners association had the power to foreclose on their home until it was too late. She said she has tried to negotiate, but the law firm handling the legal action rejected her payment plan offer of $100 a month. A public auction of the Mahers’ home is scheduled for Oct. 8.

Tim Sellers, an attorney for the firm that’s representing the Taylor Glenn association, said he wasn’t familiar with the details of the Mahers’ case. But he defended the association’s action.

“When the matter has moved along to this point, there have been a number of opportunities to make things right,” Sellers said. “It’s understandably an upsetting thing. But associations can’t just stop providing landscaping or other amenities when people don’t pay.”

Dupont Real Estate & Keller Williams19 hours ago
35% would choose to live in a suburb of a big or medium-sized city, with another 30% preferring to live in a rural area or small town.

Gen Z’s Thoughts on Renting vs. Buying
Fewer also believe renting makes you feel like part of a community (33% to 39%) and less perceive that is costs less to rent a home than to own a home (40% to 51%).
francine-dupont.cb1.so
1    View on Facebook

Dupont Real Estate & Keller Williams22 hours ago
Thank you to all those who serve our country.

• To clean the toilet bowl, pour in a cup or more of vinegar and let it sit for several hours or overnight. Scrub well ...
Read More... 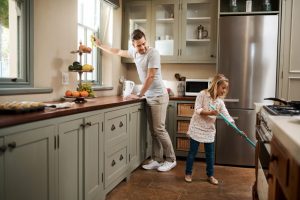 8 Home Projects to Tackle While You’re Stuck Inside

BY Erin Davis - owner of Mosaik Design & Remodeling in Portland Oregon. With social distancing orders in place across the country, many of us ...
Read More...
See all blog posts